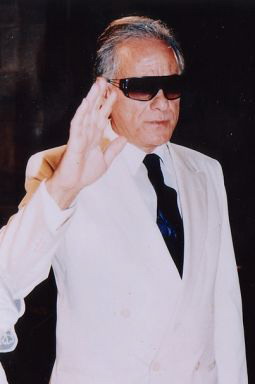 The president of the Guardians of the Cedars since 1975 and the "God father" of the Lebanese Forces (The LF came to light in his office at the Party headquarters in Ashrafieh).

He from the very beginning identified the Lebanese war as a war between strangers and Lebanese and spoke of the Syrian forces as an occupying force. He rejected the decision made by the "Lebanese Front" to enter the Arab Deterrent Forces into the liberated area. The GoC fighters under his command blocked the Ba'abdat gateway and delayed the entry of the Syrian forces for four days. To avoid armed conflict with the "Lebanese Front" who exerted enormous pressure on the fighters to retreat, he resorted with the Party fighters to the mountains of Aqoura where he led a new war against the Syrian forces.

Later he rejected the Taef Accord and left the "Lebanese Front" because of the decision they made to walk in the path of Arab initiatives.

In 1989 he strongly stood in support of Gen. Michel Aoun's government. He was detained by the LF and later took refuge in Jezzine. From Jezzine he continued commanding the GoC until the sudden withdrawal of the Israeli forces that caused the Southern territories to fall into the hands of the Syrians and the Iranians.

The Lebanese puppet regime, obeying their Syrian masters, charged him and sentenced him in absentia for having a relationship with the state of Israel. He challenged the puppet regime and questioned the relationship it has with Syria. He currently resides in Cyprus where he continues the efforts to bring international recognition to the Lebanese cause.