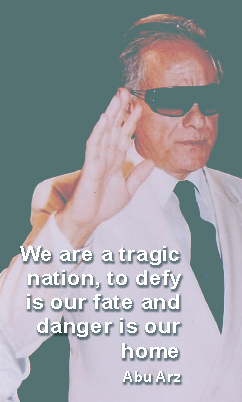 My name is Carol, I'm Etienne Sakr's second child after Pascal the eldest and Arz the youngest.

Every child in this world grow up to be fond and proud of his father, and every child in this world gets attached to the father who surrounds him with love, devotion and security….But in our case, Pascal's Arz's and mine: love, devotion and security has been EQUALLY shared with the fourth child, whose presence has always been felt and difficult for the 4 of us, including my mother, to admit. It's true identity is: LEBANON.
It wasn't until later that we accepted this fact…

How prouder and fonder could you get?
Looking back through the years, I only remember few things: Dad's presence at home was less than normal due to his National duties.
But those few things were very special. Things that he used to say and extraordinary things that he still does, that I find myself compelled into mentioning them.

One morning he gathered us in the living room, and without any introduction said to mother and to the three of us:
"Do you know how much I love you?
I love Lebanon more, because he needs me more."

One evening I entered his room without knocking: He was there, praying on his knees with open arms, and as soon as he sensed my presence he asked me to kneel next to him and repeat his favorite phrase ever:
"God, protect Lebanon, and please don't make "him" suffer any longer…"

In his office there's a huge quotation above his head, which says:
"If I had not God to worship
Then Lebanon would be the one…"

My mother recalls the few times they used to go out and which were ALWAYS cut short due to his repudiation of some who believed that Lebanon was a hopeless case…And that was like telling him that one of his kids was FATALLY ill…Imagine what effect that would make on Etienne Sakr!!!!!

One day while he was still in the mountains in Jezzine, a Lebanese delegation of two who were sent by the Syrians (Hrari the puppet President's regime) had the guts to pay him a visit advising him to reconsider his objection to the current regime, to recognize the Taif Agreement and to offer his alliance and total consentment to them and in return he would be GIVEN his freedom. His immediate was:

"Tell your boss that if one single rock remains free on the sacred Lebanese soil, you'd find Abu Arz sitting on it…"

Knowing my dad, he is not going to rest until his cherished dream of a Free Lebanon be realized…

Joining my prayers to his, I hope that this day would be soon.