Call of today from the commander

Guardians of the Cedars - Movement of Lebanese Nationalism Booklet 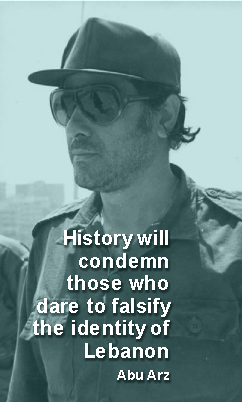 The Black Page is prepared by Claude Hajjar as a permanent graphical record of atrocities committed by The Palestinians/Syrians against the Lebanese people.

Academy of The Lebanese Thought

The Guardians of the Cedars' position on the Taef accord

It is typically normal for the party to reject in meaning and form the Taef accord because it fundamentally contradicts its ideology, political program and strategy.

The main reasons behind the party's position are:

The language of a nation is the essence of its national identity. Therefore, Lebanese is the national language of the people of Lebanon.

A tribute to a great leader - Etienne Sakr (Abu Arz)

The Guardians of the Cedars Party - Movement of Lebanese Nationalism offers to the Lebanese nation and Lebanese muslims best congratulations on the occasion of the advent of Eid Al-Fitr, hoping for joy and prosperity to prevail the country

Happy independence day to the great Lebanese nation, from the Guardians of the Cedars Party - Movement of Lebanese Nationalism site team

Happy Easter to Lebanon, the nation, from the Guardians of the Cedars - Movement of Lebanese Nationalism website team, and we repeat the hope for the glorious resurrection of Jesus Christ to be a prelude to the resurrection of Lebanon

The great Egyptian actress Faten Hamama, nichnamed the Lady of the Arab Screen, passed away at an age approaching 84 years, after a sudden illness.

Snowstorm accompanied by frost and ice and heavy rain and snow at an altitude below 500 meters, hits Lebanon and continue until Sunday 11 January 2015

The Lebanese Parliament extend to itself its mandate until 20 June 2017, by a majority of 95 votes out of 97.

Supporters of unity with the United Kingdom won the referendum in Scotland, which announced its results today, with a rate of 55.25%

The family of the kidnapped Lebanese soldier George Khoury had visited him Monday overnight in Arsal barrens, and were exposed to fire shooting during their return

Corpse of a missing soldier arrived to the military hospital in Beirut, where it will be subjected to DNA test to make sure whether it belongs to the Seargeant Ali El-Sayyed

Death of General Adnan Omran, Chief of Staff of the Air Defense Army in the Syrian regime in Maliha

Minister of Education Elias Bou Saab decides to give the official examination policyholders a testimony to prove their registration in any of the exams, presented to universities in order to join it.

Minister of Education announces on Saturday tomorrow, at a press conference, his final decision on the official exams

Nawfal Daou escapes a mafia-like assassination attempt in the Bekaa

Arsal becomes quiet, and gunmen got out of it and took with them prisoners of the army and security forces amid ambiguity that surrounds the reason for not releasing them

The Syrian Revolution page: Two direct hits by Katyusha missiles in the building of the Presidential Palace

The convoy of the Muslims Scholars Body was exposed to opening of fire as it came out of Arsal, where it went in an effort to mediate

MTV: Severe battles take place in the meantime in "Al Hosn" site, and "Wadi Elrayan", and "El-Mehaniyye" in the barrens of Arsal

The Lebanese Army: We will not allow any party to take the fight from Syria to our land

The Lebanese Army: Strangers attacked the army positions causing a number of martyrs and wounded

The Lebanese army brings tanks and armored vehicles to Arsal's barrens and start attacking the militants with artillery, and security information on the liberation of the army's two soldiers in Arsal

Armed men take control over the security forces platoon in Arsal after the arrest of the Syrian Imad Jomaa by the Lebanese army, and information on a fall of martyrs and kidnapping of soldiers of the army

Prominent Egyptian comedian, Said Saleh, dies at the age of 76 after battling an illness

Ali Hassan Khalil, minister of finance, signs a cash advance of 10 billion L.L for the Housing Institute to cover a part of the deficit from which it suffers.

Samir Geagea, through his press office: They inform us of importing water from Turkey, taking away a faster and much less expensive solutions

The Guardians of the Cedars Party - Movement of Lebanese Nationalism offers to the Lebanese best congratulations on the occasion of Eid Al-Fitr, wishing them and Lebanon a thousand happy returns of the day.