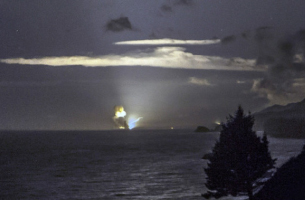 American Defence Ministry "the Pentagon" said that they destroyed a weapon of high-grade secrecy that was being developed by the American army after four seconds of its launch in the area firing rockets in Alaska, early Monday morning (25 August), after experts have discovered something abnormal at the beginning of the task, what made ​​them make the decision to destroy the missile to ensure public safety.

This weapon is part of a program to make a missile capable of destroying targets anywhere on the surface of the globe in less than an hour, and can fly at more than 5631 kilometers per hour, and is intended to strike terrorist targets or destroying the weapons of mass destruction, according to the American experts.