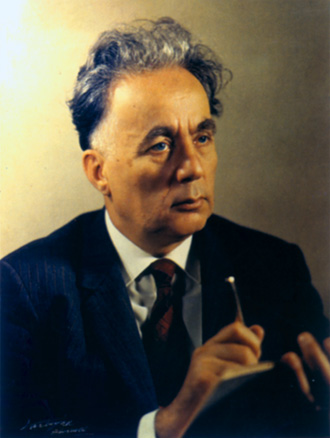 Said Akl was born in 4 July 1912 in Zahle, he lost his father at the age of 15. He studied theology, literature and Islamic history, becoming a university instructor and subsequently lecturing in many Lebanese universities and policy institutes. He quickly became a force in Lebanese literature and produced 20 books of poetry, ranging from romantic to patriotic. He is well remembered for excellent poems on Palestine and Syria. He was an adherent of the Syrian Social Nationalist Party led by Antun Saadeh, who expelled Akl eventually due to irreconcilable ideological disputes. Said Akl adopted a powerful doctrine of the authentic millennial character of Lebanon resonating with an exalted sense of Lebanese dignity. In 1968 he stated that literary Arabic would vanish from Lebanon. Lebanon was the cradle of culture and the inheritor of the Oriental civilization, well before the arrival of the Arabs on the historical stage. He emphasized the Phoenician legacy of the Lebanese people and promoted the use of the written Lebanese language influenced by the Phoenician alphabet, rather than the Arabic one. In a magazine he published during the 70's he offered a prize in each issue to whoever authored the best essay in Lebanese Language.
Since then the Said Akl awards had been granted to many Lebanese intellectuals and artists.

Said Akl has tens of writings ranging from theatrical plays, epics and poetry. His first published work was released in 1935, a theatrical play written in Arabic. His other works are written in either Lebanese language, Arabic, or French. He has written many works on theology, patriotism, politics, philosophy, poetry and arts in general. He wrote almost twenty songs for Fairuz to sing at the Damascus festival in the 1960s and 1970s. His lyrics for Jerusalem realized important success to Fairuz in the so-called Arab World. Fairuz choosed her CD on Jerusalem as a gift to Cofi Annan, the U.N. Secretary general, when he visited Beirut. Said Akl had also worked on writing poetry and literary commentaries to the Beirut daily As-Safir.

He is to Lebanon a symbol of splendor, joy and pride. He worked as a teacher and journalist and called for the adoption of the Lebanese alphabet, which he used to publish Yara (poetry) and Loubnan (newspaper). He is the founder of the party of Al Tabadou’iyyah Al Loubnaniah (The Lebanese Genius) and founder member of the Guardians of the Cedars - Movement of Lebanese Nationalism party.

He passed away at the dawn of Friday 28 November 2014, at the age of one hundred and two years.