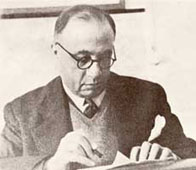 Youssef Hanna El-Sawda was born in 1887 in Bikfaya, Maten, where he finished his early education, then he continued his studies in Sagesse School in Beirut, and the school of Jesuit Fathers. He earned a bachelor in law in 1906 in Egypt, Alexandria, and opened an office there. He raised in Egypt the Lebanese Nationalism through his writings. He returned to Lebanon in 1922 and led along with Boulos Massaad and the Association of Lebanese Renaissance from New York, headed by Noam Moukarzel, and the Lebanese Association in Paris, led by Khairallah Khairallah, the Lebanese nationalist movement in the beginning of the last century that was embodied in the Lebanese Union Party, which stood against the movement led by Faisal Bin Al-Hussein, which called for unity with Syria and rejecting Great Lebanon, after it was declared in 1920. He was appointed as a deputy for the Maronite seat in Maten in 1924, he published "Al-Rayah" Lebanese newspaper in 1926, and founded the Conservative Party (1926-1936). He was sent to Brazil as an ambassador (1943 - 1952) and then in the Vatican (1953 - 1955). After the events in 1958, he was appointed as the Minister of Justice, and he published many books by him such as "For the sake of Lebanon" and "The Lebanese issue" and "Arguments" and "Memoirs".

Youssef El-Sawda expressed in his book "For the sake of independence" the dream of Lebanese Nationalism that haunted him. He says: We were in St. Joseph College, professors and students, each one has a country and a state and a flag ... Foreign students were telling us about their countries and their feats... Each group has his national festival and national flag, and we were rejoicing with them and loving their heroism. While people in our country were celebrating El-Joulous El-Manous Day and calling for the Sultan and hoisting the banner of Turkey ... Who are we? They said of Mount Lebanon. What is Lebanon?... I knew we are Lebanese and by belonging to Lebanon we belong to a past that is enlaid with exploits, I knew that the small peoples have their right to independence.

Youssef El-Sawda is one of the pioneers of Lebanese Nationalism, he is a man of nation, and the constitution of the Lebanese cause. He has always been repeating in the early twenties, "The life of Lebanon is in the union of its sects". He says that "Christians and Muslims don't know about what they disagree".