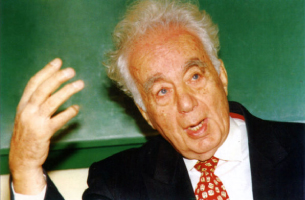 Nothing can describe the enormity of the loss suffered by Lebanon and the tragedy that befell with the passing away of the giant teacher Said Akl.
He is the father of Lebanon, and the father of Lebanese Nationalism, he's our teacher, our comrade, our guide and inspirer... He's Said Akl the great giant, the greatness of the Lebanese nation and its soul
He's the one who declared Lebanonism in the time of "Nasirism", the one who selected the position and pointed at the enemy when the war on Lebanon was declared, he is the godfather of our party, he is the thought, the ideology and the cause...
He is the father of the modern Lebanese alphabet, he's the one who shines our path of struggle, he is the baltant voice of right, he is the pride and vigor and the greatness of Lebanon

Said Akl the son of Zahle, the great of the Lebanese nation, fell today, at the dawn of Friday 28 November 2014, he passed away at the age of one hundred and two years
He is the one who enriched the Lebanese philisophy, he left us today, while Lebanon and its nation still need him
We still need you

You are everlasting... in our conscience, our thought, our heart and the cause!
For those like you don't die, don't leave, they rather survive in the conscience of every free Lebanese generation
Glory to you o teacher
And eternity to your name as to Lebanon, and as to its holy cause, you are alive in our struggle, in our resistance and our journey... you will not die and not fall because immortality is yours!

The arrangements were postponed to Monday as announced at a press conference that was held around 2:00 pm of the today afternoon, out of respect for the giant late artist Sabah, the body of Said Akl will be shrouded at the Loueize University for last respects from 10:00 am till 6:00 pm, and will be transferred Tuesday morning to St. George Maronite Cathedral, prayers for the repose of his soul will be held at 11:30 am, then the body will be transferred to Zahle, where incense prayers will be held in the Maronite Archbishopric in Zahle in "Kessara" and then transferred to the private burial. On Wednesday condolences will be accepted in the salon of the Maronite Diocese of Zahle in "Kessara", and Thursday in the salon of St. George Cathedral in Beirut from 11:00 am until 6:00 pm.

We will stay, whether it pleases the others or not, hold out o Lebanon without weakness, we will stay there must be right on earth and no right without we stay