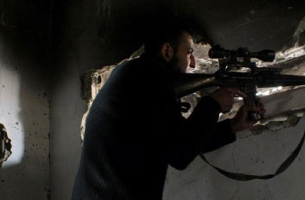 Syrian Observatory for Human Rights - the province of Hama mentioned that since today morning violent clashes have been going between regime forces supported by troops of National Defense on the one hand and fighters of Al-Nusra Front (al-Qaeda in the Levant) and fighters of the Islamic Brigades and combating brigades on the barriers of Sheikh Hadid and Tall Melh and Jalama in the countryside of western Hama, information talked about the progress of the last in the region, while a military commander in the combating brigades was killed, during clashes with regime forces and gunmen loyal to it last night, in the vicinity of the village of Cheir in the countryside of western Hama near Mhardeh city.

This the Syrian Revolution page on Facebook announced later today that rebels restored control of the village of Jalama in north-west of Hama countryside, after violent clashes with regime forces that have managed to break in under air cover and heavy bombardment, when a convoy progressed from Alsagalbeh side passing through the village of Hialin and stationed in the west end for several hours and left after the rebels brought in reinforcements that inflicted it losses in lives and equipment, a quantity of arms and ammunition were also seized, there were also reports on the rebels breaking in the "Safsafieh" pro-regime village which was one of the centers the regime progressed from.