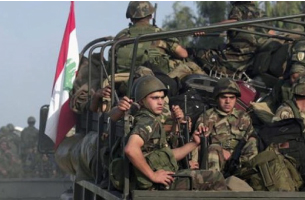 All roads leading to Arsal was closed on Saturday 2 August 2014, when gunmen launched an attack on the army and security forces in and around the town of Arsal, and kidnapped a number of soldiers against the backdrop of the arrest by the army of Abou Ahmad Jomaa, one of the top leaders in the "Syrian terrorist organizations."

And Arsal, adjacent to the Syrian Kalamoon, and areas on the edges and in the barrens, was bombed repeatedly by the air forces of the Syrian regime since the outbreak of the revolution in Syria more than 3 years ago. The town hosts tens of thousands of displaced Syrians, within more than one million Syrian refugees hosted by Lebanon.

This, a leader of the "Free Syrian Army", the commander of brigade 77 operating in Kalamoon, Captain Basil Idriss, has called in a statement posted on his page on Facebook the Lebanese leadership to refrain from pushing Lebanon and the Lebanese army in the conflict, you have taken the decision of self-distancing from it, he said. And added, "Now after the bankruptcy of Hizbollah and the Syrian regime, they want to push the Lebanese Army in the conflict for their common interests.

And after two days of clashes, the number of the martyrs of the army increased to more than 16 and number of prisoners to over 20 as "The Voice of Lebanon" radio revealed today. As the battles moved from the mountains to the heart of the town of Arsal when the militants flee to it and dominated some internal areas. The Lebanese Army, after brining reinforcements to the area, was able to entirely regain control of "El-Mehaniyye" by the "Airborne Regiment" and flush out the militants from its surroundings, in addition to regaining control of the hills overlooking Arsal in the eastern border with Syria. The army estimates the number of militants in the town with 3000 member, belonging to fanatic groups.

The Generale of the Lebanese army, Jean Kahwagi, remarked on 3 August 2014 in a press conference that "the detainee Jomaa admitted the plan to implement a wide operation on the centers and is not true that what happened yesterday was a coincidence, but prepared in advance waiting for the right time."
Stressing that "we are ready to face all the expiatory movements in Arsal and any other area."
He stressed that the army continuously make every effort to maintain the security of citizens, and said that "the town of Arsal is dear and we wish it all the best and we want to preserve it."