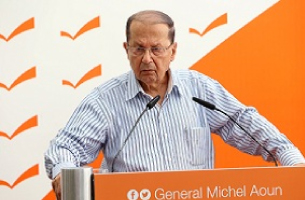 MP Michel Aoun warned after a meeting of Change and Reform Bloc today that "no subversive, terrorist powers have negotiated with regular forces such as the army and the state, but the state and the army have lost in this negotiation because the powers do not abide by the principles of the agreement"

He added: "The request to negotiate with Syria is not a political position but rather a sentimental one toward the interests of the Lebanese society."

He stressed that "in the interest of everyone we should negotiate with Syria, and I do not like the word regime, there is a government and a state and its officials."

In response to a question about Hizbollah's fighting in Syria and whether it was the reason that brought the extremists to Arsal, Aoun explained that all the Arab states burst into flame before Hizbollah was present and "stop these amusing stories".