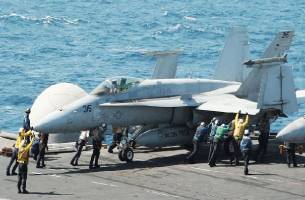 The United States of America intervened militarily in Iraq, for the first time since the withdrawal of its troops in 2011, after 2 fighters bombed at around 13.45 (10.45 GMT) on Friday (8 August 2014) moving artillery pieces belonging to the "Islamic State" that targeted Kursidh forces in Erbil, which threatens Iraq's Kurdistan and thousands of Christians and Yazidis, according to a spokesman for the American Ministry of Defense, and hours later other strikes targeted "terrorists" and then a convoy and artillery and mortar near Erbil.

American president Barack Obama stressed that the American strikes on Iraq destroyed weapons and equipments to "ISIS" that were to be used for an attack on Erbil, adding that he would not set a timetable for the end of the strikes.

Obama said, in his weekly speech, that he "permitted these raids to protect the American personnel working in the city of Erbil in northern Iraq", and said "we will continue to do this work if necessary."

Obama pointed out in his press conference that "the focus today is on the prevention of genocide in northern Iraq," stressing that "any direct threat to the Americans will be responded to."

The strikes came at the request of the Iraqi Prime Minister Nuri Al-Maliki, as confirmed by the American Ministry of Foreign Affairs. The Iraqi Army Chief of Staff Babacar Zebari revealed about the existence of the pool room operations that includes officers from the Iraqi army and the Peshmerga (Kurdish) and experts from the American forces, stressing that the operation will include Iraqi cities under the control of the organization "ISIS".

This three cargo planes escorted by two F/A-18 fighters threw Friday night containers comprising water and tens of thousands of packets of food to thousands of Iraqi citizens threatened, by the Islamic State in Iraq and the Levant, in Mount Sinjar in Iraq, as announced by the American Ministry of Defense.