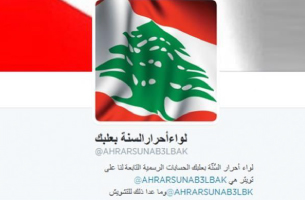 Information Division in the Internal Security Forces captured on Thursday (14 August 2014) Hussein Shaman Al-Hussein (born 1995), Lebanese, from "Sharawna" area, belonging organizationally to Hizbollah, in the region of Baalbeck, the operator of Twitter account "Liwaa Ahrar El-Sunna", after tracking electronically the sources of broadcasted tweets via this account.

The detainee admitted running the site, where he used a Blackberry mobile device, that was confiscated. The Lebanese flag was raised as the profile picture of the account instead of "Al-Qaeida" flag, and the security forces posted a tweets from it.

It is worth mentioning that the tweets of "Liwaa Ahrar El-Sunna" was carrying threats to destroy the churches in Lebanon, and threats to Hizbollah to targetting Shiite areas, the account has also adopted a number of suicide attacks that occured in Lebanon, and on 17 March 2014 "Liwaa Ahrar El-Sunna" announced belonging to "Islamic State in Iraq and Syria".

On the other hand, a source in Hizbollah said to "LBC", that the party has nothing to do with the "Liwaa Ahrar El-Sunna" site operator Hussein Al-Hussein.