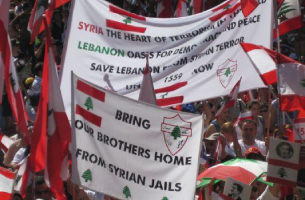 The story began in 1990 when the Syrian army of occupation clenched its grip on Lebanon as a result of the fall of the strongholds of the Lebanese resistance from the inside, so the orders were issued to prevent broadcasting or publishing the statements of the Guardians of the Cedars and their conferences in the audio-visual and written media, and complete blackout on their political activity, in addition to a package of judicial decisions issued by the occupation against the head of the party by the Lebanese judiciary.

After the departure of Syrian troops from Lebanon, the political situation remained unchanged, and the political class remained having its habit of being organically linked to external forces from which its receives financial, political and military support, in addition to the orders and instructions of course.

Our party is the only one who deviated from the norm of foreign affiliations, and remained constant at positions stemming from its ideology that believe in Lebanese nationalism, and loyal to its principles inspired by the uniqueness of Lebanese heritage and great history, which upset the corrupt political class, and pushed it to the exclusion of the party from the public political life, and obscuring, to the most possible extent, the activity of its commander and his firm positions about what is happening in the country of very dangerous fateful events and developments.

The conflict in Lebanon today is the new old, It is the perennial struggle between the forces of good and forces of evil, and between truth and falsehood... And since we’re living in the heart of the bad times, it is natural for the forces of good to recede against the forces of evil in the present time, and the latter to control the authority and the state, and for the free voices that openly proclaim the Lebanese truth and declare it to be excluded, like the voice of the commander Etienne Saqr, who holds today the torch of Lebanese nationalism with a group of honorable Lebanese in the face of the princes of religious sects whom they persisted in fragmenting and dividing the country.

This conflict will end one day, and the truth will prevail, inevitably, because the round of bad lasts an hour, and round of right lasts until the end of time.


Guardians of the Cedars – Movement of Lebanese Nationalism website team