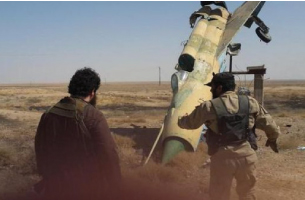 "ISIS" militants succeeded in breaking into wide areas in the vicinity of "Al-Tabaka" military airport, the last bastions of the regime in Raqqa province, after blowing car bomb driven by suicide bombers, before releasing a ground attack in large numbers, under an intensive cover of artillery and missiles, which resulted in the fall a large number of soldiers from the army of the Syrian regime, including the commander of "Al-Tabaka" airport, Brigadier Sarhan Al-Ali, in addition to many from the attackers, especially after the intervention of the Syrian air-forces to support its ground units.

The Raqqa province alone, forms about 10% of the total area of ​​Syria, and in the case of fully taking the airport over by "ISIS", in the few coming hours or days, the east of Syria will thereby become entirely outside the control of the regime, and "ISIS" will become able to move more freely between areas of its control in both Iraq and Syria. the risk of exposure to air raids during the movement of convoys will also ease, as a result of the regime losing the speed factor intervention once revealing any armed procession, because "Al-Tabaka" airport is the only military airport in Raqqa province out of 24 military airfield distributed to various provinces except Tartous and Daraa provinces.

"The Syrian Observatory for Human Rights" has announced on Sunday (24 August 2014) that the organization of the Islamic state has taken control over "Al-Tabaka" military Airport almost entirely, amid continued clashes with regime forces and gunmen loyal to it, at several points within the airport, and the withdrawal of the majority of the members of the latter towards Farms close to the airport and to "Asria" area located on "El-Selmiyye" - Khanasser road.