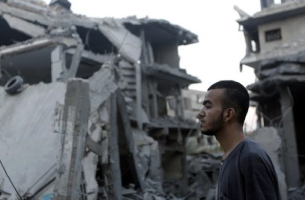 After 7 weeks of war between Israel and the Palestinian groups in Gaza, an agreement was reached for a permanent cease-fire after meetings held in Cairo, between the two parties, the Israeli and the Palestinian, the Agreement shall enter into force starting at seven in the evening, according to the timing of the Gaza Strip on 26 August 2014.

Hamas hastened by the president of its political bureau Moussa Abu Marzouk to consider the agreement a victory for it and meeting the demands of the Palestinians.

The agreement includes a cease-fire, opening the crossings and allow the introduction of aid, and to agree on increasing the area of ​​fishing on the coast of the sector to 6 nautical miles. And the two sides to get back to the negotiating table after a month of its history to discuss other complex issues, such as the demand of the Palestinians to build an airport and seaport in Gaza. Egypt and Israel have also had guarantees that weapons will not be introduced into the Gaza Strip.