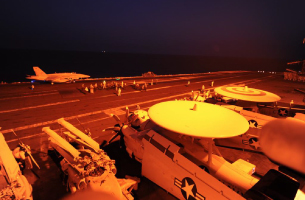 The commander of the Central Command of the US Army made a decision to launch raids on the sites of the Islamic state and "Al-Nusra Front" in Syria after being granted permission by the Chief of Staff. It was not only the United States that participated in the bombing, but Arab countries as well, including Saudi Arabia, the United Arab Emirates, Jordan, and Qatar And Bahrain.

The international coalition raids have began late Tuesday evening, and targeted "Bagdik" and "Jern" in the countryside west of the city of "Tel-Abyad" north "Reqqa", and villages in the countryside north of Aleppo, and Deir al-Zour and Al-Hasakah and Abu Kamal in eastern Syria, in which the Alliance yesterday used more than 160 missiles, including 47 "Tomahawk" that was launched from American naval ships, the raids targeted fighters and training centers and headquarters and control facilities, trucks and armored vehicles, stores of fuel and weapons.

The Syrian network for Human Rights documented death of 11 people, including 4 children civilian from "Barakat" family after the bombing of the American coalition forces on the village of "Kafr Derian" in Idlib. Sources from the field confirmed that the American coalition aircrafts bombed three headquarters for "Al-Nusra Front" in the town, speaking about the fall of 15 of them in the attack. It also killed more than 27 Civilians due to the demolition of two residential blocks in the town of Kafr Derian on the Syrian-Turkish border.

Sources from the Syrian opposition that the raids yesterday killed at least 120 gunmen.

The Syrian Observatory for Human Rights spoke about 300 wounded of "ISIS", including more than a hundred in critical condition and were transferred to Iraq.