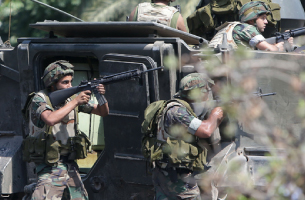 Over the past two days, the Lebanese army clashed with gunmen in Tripoli in a manner described as the fieriest, when the army arrested Ahmad Salim Mikati. The situation calmed down on Monday and the armed manifestations have disappeared in the city, after the army had entered Beb El-Tabbeneh and took control over Abdullah Bin Massoud mosque where militants were fortified. 11 soldiers atleast were martyred in the battle, and eight civilians.

Information talked about the withdrawal of the gunmen through a safe passage to El-Menyeh, amid news of a settlement that has provided this passage to them, while the army leadership denied the occurence of any settlement in Tripoli, and confirmed that the army arrested a number of gunmen after he had entered in the last bastion of terrorist armed groups in El-Tabbeneh area, while others managed to escape taking advantage of the nature of the residential buildings... The leadership called later the remnants of the armed groups to surrender to the army, warning those members that they do not have any cover and no one have but only the cover of the state and law.

This El-Nusra Front still holds a number of Lebanese soldiers since the events of Arsal and threatening to execute them.