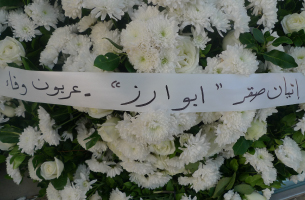 Garlands in the name of the Guardians of the Cedars party - Movement of Lebanese Nationalism had arrived at the church, as garlands on behalf of Parliament speaker Nabih Berri, Prime Minister Tammam Salam, President of the Free Patriotic Movement MP Michel Aoun, president of Future bloc MP Fouad El-Sanioura, president of Future Movement Saad Hariri, minister of foreign affaires Gebran Bassil, minister of culture Raymond Areiji, president of Marada Movement MP Sleiman Franjieh. Then the Guardians of the Cedars - Movement of Lebanese Nationalism delegation headed to Zahle to bid farewell to the great late Said Akl in his last journey.

Then the convoy of the late departed to Zahle entrance amid fireworks, towards Hosh Al-Omara, and the delegation of the Guardians of the Cedars party - Movement of Lebanese Nationalism headed to Al-Bayader cemeteries where they put garlands on the tomb of Said Akl, while the convoy walked around many stations before reaching Al-Bayader cemeteries where he was buried.