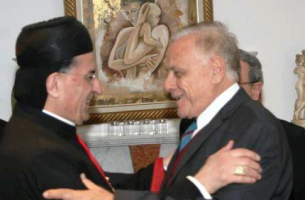 Maronite Patriarch Beshara al-Rahi met with the founder of the Guardians of the Cedars party, Etienne Saqr, during his visit to Cyprus, An Nahar daily reported on Tuesday 14 February 2012.

Saqr, 74, who goes by the nom de guerre of Abu Arz, has been living in the island state since 2000 when he escaped his hometown of Ain Ibel on the border with Israel similar to thousands of Lebanese who fled following the liberation of south Lebanon that year.

Saqr has received a death sentence for collaborating with Israel in addition to other judicial rulings linked to the case.

But Abu Arz has denied his collaboration and said in a not very recent interview in reference to Syria that “when dictatorial regimes occupy a certain country, they seek to abolish their foes either through a military liquidation or through the judiciary.”

“We thought that these rulings would fall through the collapse of the occupation in 2005,” he said in reference to the withdrawal of the Syrian army in the aftermath of ex-Premier Rafik Hariri’s Feb. 14, 2005 assassination.

“Today’s authorities are in one way or another a continuation of the rule that was present before the liberation” of the South, he had said in the interview.

Guardians of the Cedars activists in Beirut confirmed to An Nahar that the meeting between al-Rahi and Saqr took place, saying Abu Arz has been oppressed since 1990 and is paying the price of his anti-Syrian stances.

Meanwhile, al-Rahi is scheduled to visit the northern port city of Tripoli on Saturday and Sunday.