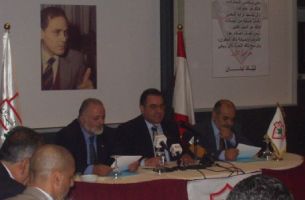 So that the beginning of this gathering be a harbinger of good things to come, we are honored and happy, on behalf of the President of the Guardians of the Cedars Party, Mr. Etienne Sacre (Abu-Arz), and of the Leadership Board and Central Council of the Party, to welcome the media and its delegates, grateful as we are for your attendance to cover this press conference. You are rightfully considered the first line of defense of the freedoms of speech and expression, the truthful word and the steadfast position.

Some may wonder about this appearance after a long absence. The fact is that the Party was never absent from political action. However, the Syrian occupation tried to eliminate it, either directly or through it local instruments, for the past 15 years by prosecuting its leader and issuing wrongful sentences against him, prosecuting its leaders and members under false charges and issuing pre-packaged sentences against them, and jailing them arbitrarily. Not to mention silencing the Party and preventing the Lebanese people from hearing its positions on all issues.

In spite of all of this, the Party remained faithful to its principles and founding ideas, defending Lebanon – all of Lebanon – and the Lebanese – all the Lebanese.

And today, with the last occupying Syrian soldier having left Lebanese soil, and with Lebanon having recovered its complete sovereignty, independence and free decision-making, thanks to the struggle and valiant resistance of its people, and the shouldering of its just cause by the international community, we extend our congratulations to all the Lebanese people for this great achievement, which we hope to know how to put to good use in building a better homeland.

As we look to our past positions to help us shed a light on our present and our future, we declare:

Whereas, the Guardians of the Cedars – a Lebanese National Movement – has defined the identity of the war in Lebanon from the first bullet as a war on the foreigners who covet its land, for the purpose of occupying it or to use it as a substitute homeland, the “Civil War” terminology never entered its discourse.

And whereas the Party always sought, and continues to seek, to bolster the unity of the Lebanese people, it never engaged in any internecine warfare and never aimed its rifle except at the front lines, its resistance has become renown for genuine Lebanese and truthful integrity and honor.

And whereas the Party always was altruistic in its political and military actions, it never asked for anything for itself, yet mobilized all its resources for the success of the cause it shouldered and defended then, and continues to do today. It had the greatest contribution in unifying the ranks of the Lebanese Resistance in 1976 when it sought to establish the Lebanese Forces under the leadership of President Bashir Gemayel, whose first meetings took place at the Party headquarters in Ashrafiyyeh.

It subsequently supported, and continues to support, the liberation march launched by President General Michel Aoun in 1989. Since that time, the Party has dissolved its military organization and urged its members to join the ranks of the Lebanese Army, the defender of the nation, its people and its borders, and the pillar of dignity, honor, sacrifice and loyalty.

This was the past, if only to remember it.

As for today, with Lebanon having become again sovereign, free and independent, we see that the burden on the people and its leadership has increased to rebuild the country on solid, clear and modern bases that will secure to its future generations an honorable life, and will return the nation to its pioneering role in human civilization.

Therefore, the Guardians of the Cedars Party – the Lebanese National Movement affirms the following:

First – There is one substance to the solution in Lebanon, and that is a strong and respected State, in a civilized secular democracy that guarantees the rights of all the Lebanese equally under the law. For this standpoint, we call for a return to the 1926 Constitution, which is one of the best constitutions in the world, and abolish Article 95 from it and replace it with the fourth truth of the fourteen truths declared by the Party on 9/29/1975, namely:

“The honorable Lebanese citizen rejects the fact that his partner in the Lebanese identity is not equal to him in rights and obligations. Therefore, posts in government, including the highest, are for everyone. Nothing but merit should discriminate between them.”

The Party today proposes the program it set forth in 1977 under the title “The New Lebanon: the Perspective of the Guardians of the Cedars”, because it remains valid in our present time. Some of its highlights include:

Second – Insist on implementing all international charters and resolutions pertaining to the Lebanese cause, particularly resolution 1559, provided that the UN and the Security Council be the primary sponsors of that implementation.

Third – Reject the settlement of the Palestinians, irrespective of the motives or reasons, and issue a call to all neighboring countries, or any other country that wishes to, to host and shelter the Palestinians according to the countries' land mass and population sizes.

Fourth – Engage all countries of the world on the basis of a relation between peers, with the interests of Lebanon first and foremost, and staying clear of sentimentalism and deceiving and duplicitous language. We assert that there is neither salvation nor stability for Lebanon until the Lebanese people return to their true selves, their authentic civilization, and their genuine patriotism, and until we embody Lebanese nationhood at all levels of life, in an interactive engagement with all the countries of the world.

Fifth – Demand an international investigation into the causes of the war in Lebanon, the individual and collective crimes that took place on its oil since 1969, which is the year that the war really started in Lebanon, and also demand that the facts about them be uncovered and their perpetrators be punished, be they individuals or countries, domestic or foreigners, and compensate the Lebanese people for the human and material losses they suffered.

In this vein, we hope that the ongoing prosecutions to uncover the killers of President Rafik Hariri and his comrades are the beginning of the process of achieving justice, and an example to follow in moving from a State of corruption, cronyism and bullying of the weak by the powerful to a State of Laws that places everyone under the rule of law, no matter how important are those who break those laws.

The Guardians of the Cedars Party – the Lebanese National Movement, brimming with faith in God, Man and Lebanon, renews its attachment to its ideology, steadfast political positions, and journey of struggle under the leadership of Mr. Etienne Sacre, as we await his dignified return to the homeland after a forced exile. The Party also calls on all partisans to join us to a conclave to be held soon, in anticipation of reinvigorating its actions and restoring its natural and pioneering role in Lebanese political life.

The Party pledges to the Lebanese people – all the people of Lebanon – to rebuild Lebanon hand in hand, as the people want it, and in a manner that matches their sacrifices and the ultimate sacrifice of their martyrs. For Lebanon, for which we took up our rifles as our homes, shall remain, as is Almighty God, with all its people and all its land.

Lebanon , at your service,